Skip to Content
Home Sound A journey inside the organ

Judy Martinez Leave a Comment on A journey inside the organ

A journey inside the organ

The largest organ in Russia is installed in the Svetlanov Hall of the Moscow International House of Music. I was lucky to see him from the side from which there are very few who saw him. 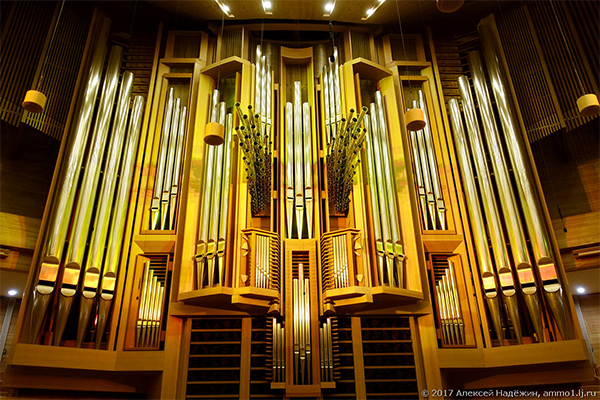 This organ was made in 2004 in Germany by a consortium of companies Glatter Gotz and Klais, considered the flagship of organ building. The organ was specially designed for the Moscow International House of Music. The organ has 84 registers (in an ordinary organ, the number of registers rarely exceeds 60) and more than six thousand pipes. Each register is a separate musical instrument with its own sound.

The organ is 15 meters high and weighs 30 tons. The cost is two and a half million euros. 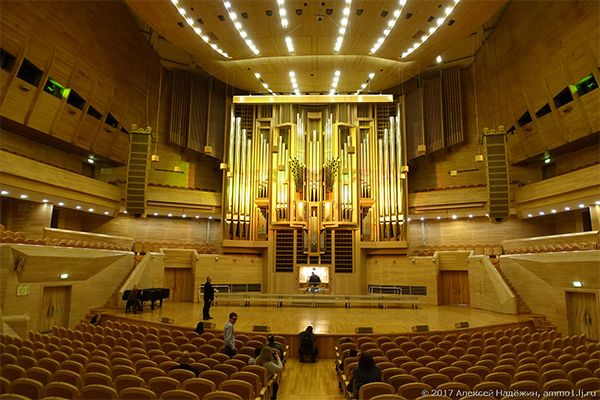 Pavel Nikolaevich Kravchun, Associate Professor of the Department of Acoustics of Moscow State University, who is the chief superintendent of organs of the Moscow International House of Music and who took part in the development of this instrument, told me about how the organ works. 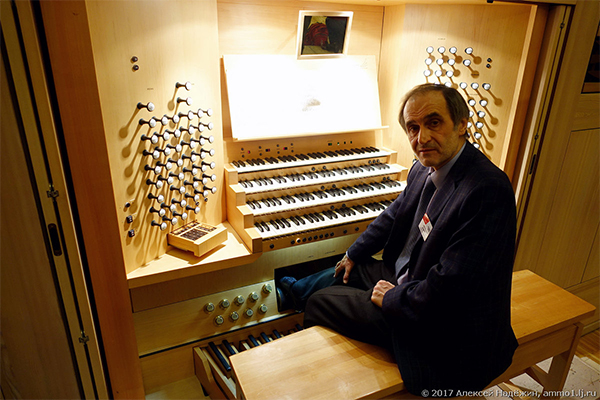 The organ has five keyboards – four hand and one foot. Surprisingly, the foot keyboard is quite complete and some simple pieces can be played with just your feet. Each manual (manual keyboard) has 61 keys. On the right and left are the handles for enabling the registers. 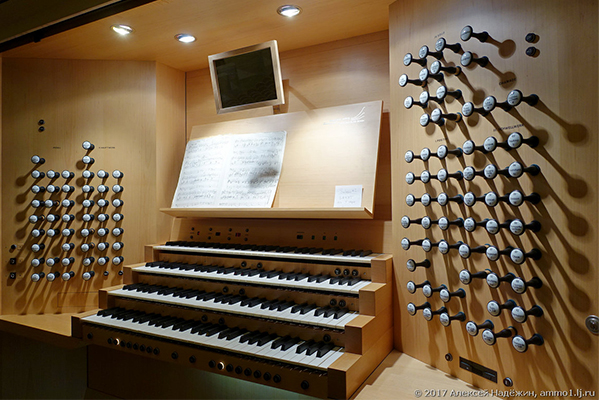 Although the organ looks completely traditional and analog, it is actually partly controlled by the computer, which primarily memorizes presets – sets of registers. They are switched by buttons on the ends of the manuals. 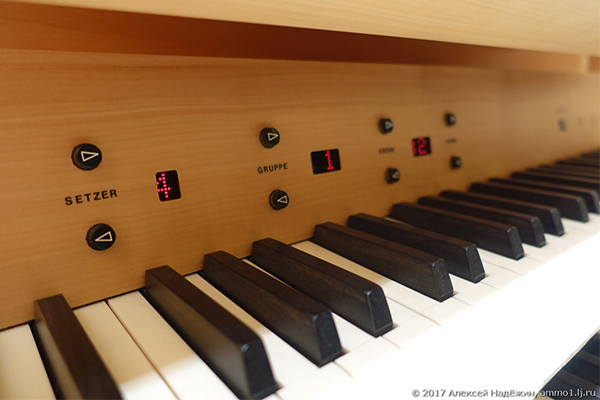 The presets are saved on a regular floppy disk. Of course, in computer technology, disk drives are almost never used, but here it works properly. 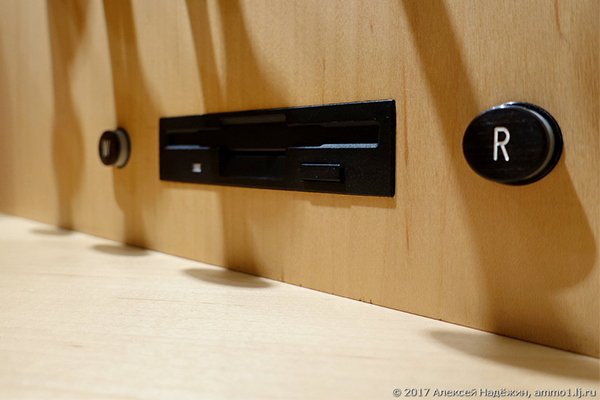 It was a revelation for me to find out that every organist is an improviser, because the scores either do not indicate a set of registers at all or indicate general wishes. In all organs, only the basic set of registers is common, and their number and tonality can vary greatly. Only the best performers can quickly adapt to the huge set of organ registers of the Svetlanov Hall and use its capabilities to the fullest.

In addition to the handles, the organ has foot-switchable levers and pedals. The levers enable and disable various functions controlled by the computer. For example, the combination of keyboards and the fade effect, controlled by a rotating roller pedal, as the rotation of which additional registers are connected and the sound becomes richer and more powerful.

To improve the sound of the organ (and along with other instruments), an electronic Constellation system was installed in the hall, which includes many microphones and mini-speakers on stage, lowered from the ceiling on cables using motors and many microphones and speakers in the hall. This is not a sound reinforcement system; when it is turned on, the sound in the hall does not become louder, it becomes smoother (spectators at the side and far seats begin to hear the music as well as the audience in the stalls), in addition, reverberation can be added to improve the perception of music. 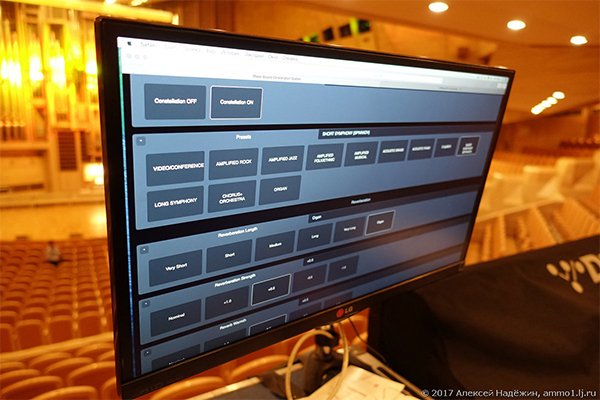 The air with which the organ sounds is supplied by three powerful but very quiet fans. 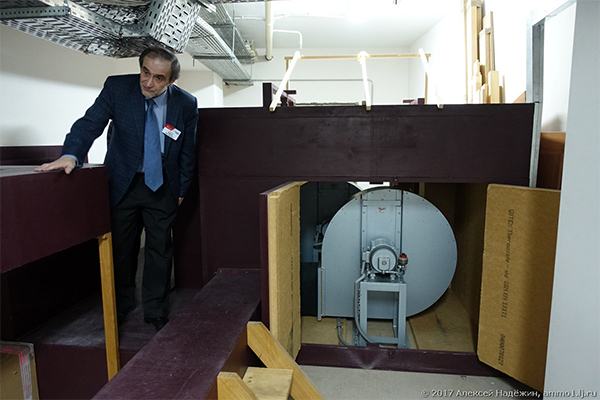 For its uniform supply, … ordinary bricks are used. They press the furs. When the fans are on, the bellows swell and the weight of the bricks provides the necessary air pressure. 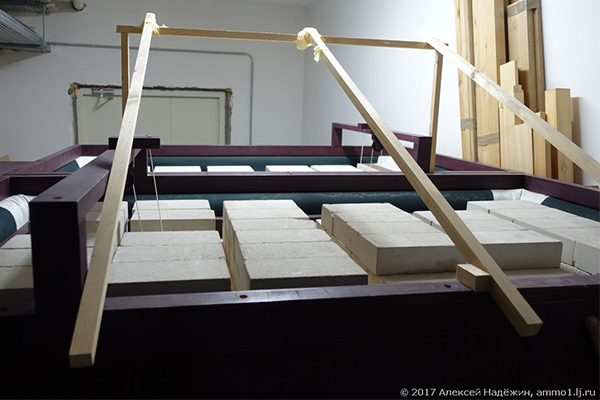 Air is supplied to the organ through wooden pipes.

Surprisingly, most of the dampers that make the pipes sound are controlled purely mechanically – rods, some of which are more than ten meters long. When there are many registers connected to the keyboard, it can be very difficult for the organist to push through the keys. Of course, the organ has an electric amplification system, when turned on, the keys are pressed easily, but high-class organists of the old school always play without amplification – after all, this is the only way to change intonation by changing the speed and force of pressing the keys. Without amplification, the organ is a purely analog instrument, with amplification – digital: each trumpet can only sound or be silent.

This is how the rods from the keyboards to the pipes look like. They are made of wood, as wood is the least susceptible to thermal expansion. 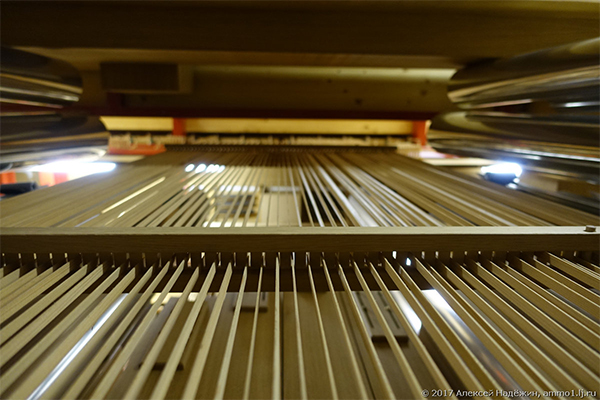 You can go inside the organ and even climb a small “fire escape” ladder along its floors. There is very little space inside, so it is difficult to feel the scale of the structure from the photographs, but still I will try to show you what I saw. 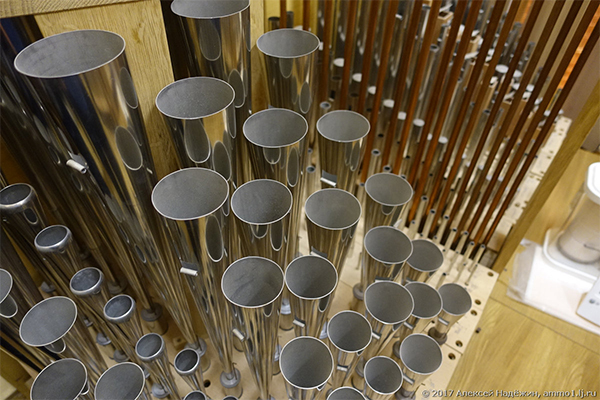 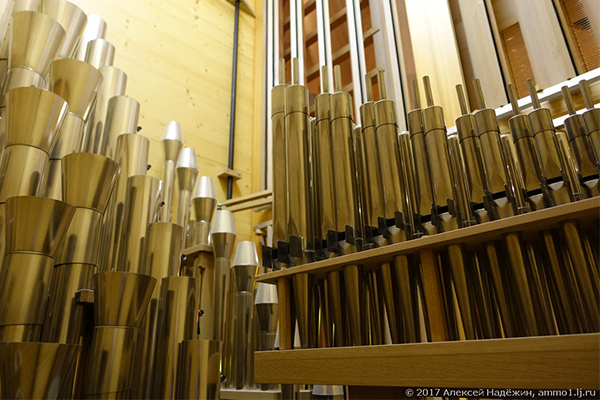 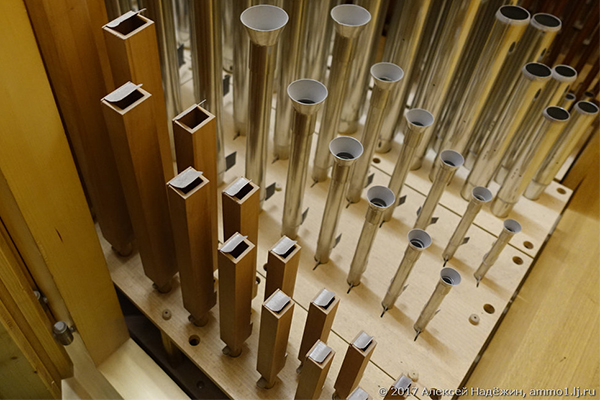 The organ is re-tuned before each major concert. The setup process takes several hours. For adjustment, the ends of the smallest pipes are slightly flared or rolled with a special tool, the larger pipes have an adjusting rod. 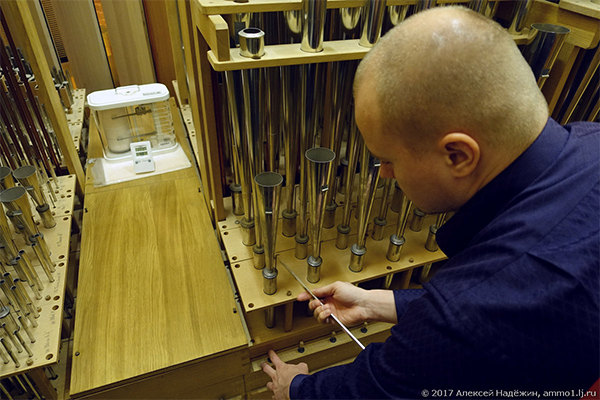 Large pipes have a petal cut out that can be twisted and twisted slightly to adjust the tone. 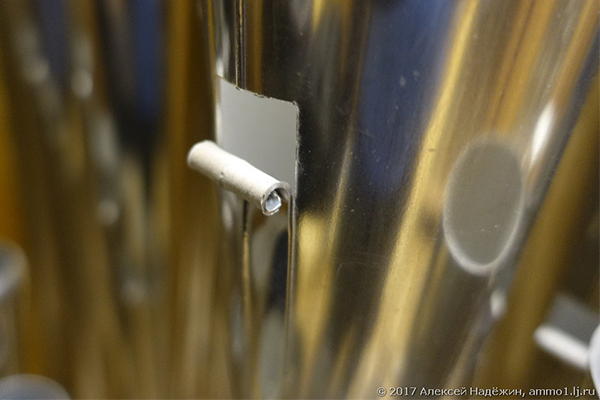 The largest pipes emit infrasound from 8 Hz, the smallest – ultrasound. 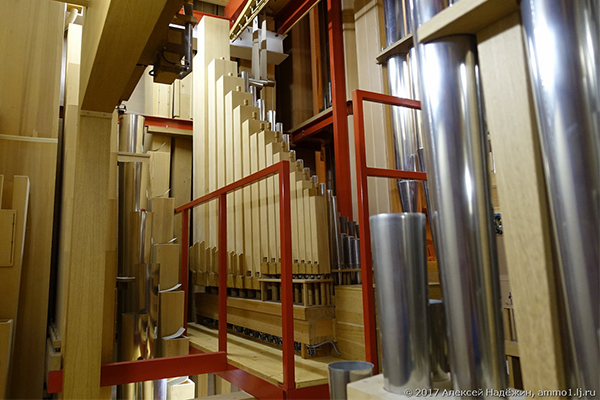 A unique feature of the MMDM organ is the presence of horizontal pipes facing the hall. 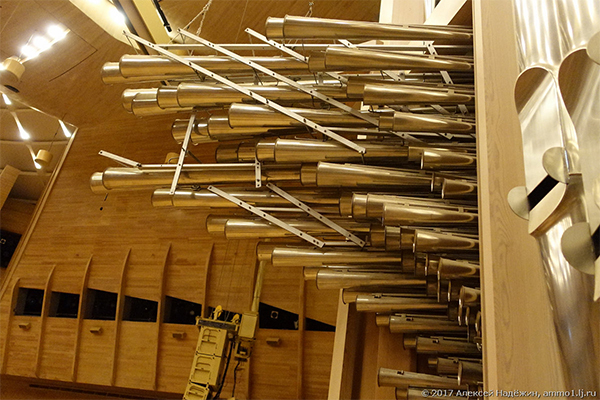 I took the previous shot from a small balcony, which can be accessed from inside the organ. It is used to adjust horizontal pipes. View of the auditorium from this balcony. 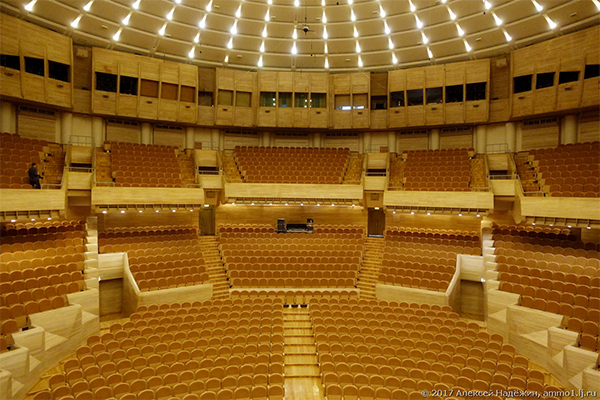 A small number of pipes have only an electric drive. 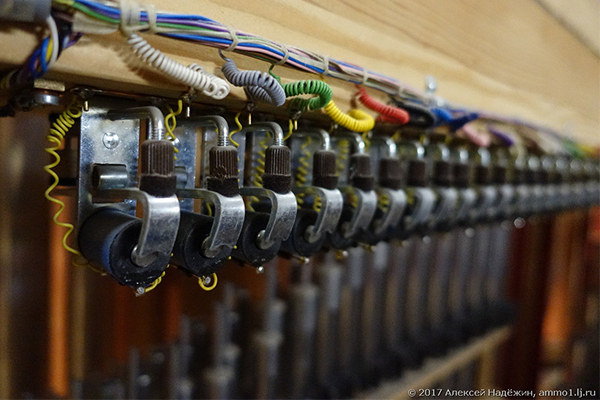 The organ also has two sound-imaging registers or “special effects”. These are “bells” – the ringing of seven bells in a row and “birds” – the chirping of birds, which occurs thanks to air and distilled water. Pavel Nikolaevich demonstrates how the bells work. 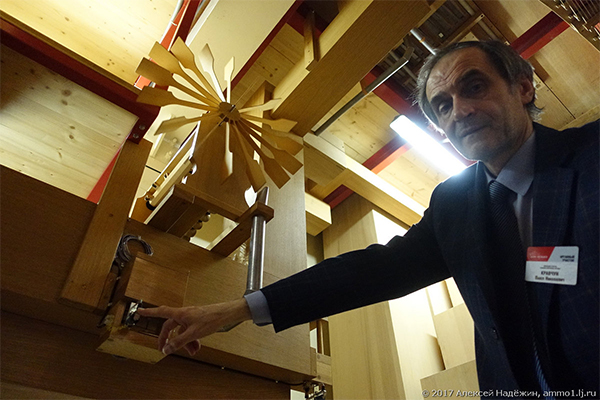 An amazing and very complex tool!

The Constellation goes into parking mode, and that concludes my story about the largest musical instrument in our country. 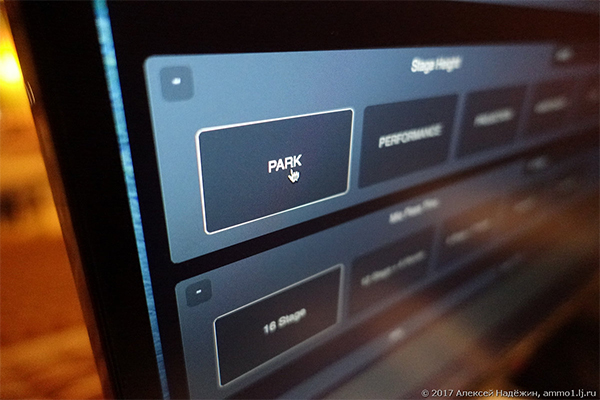 Thanks to the press service of the Moscow International House of Music and Irina Cherkasova for the opportunity to see the “king of instruments” from the inside.

Prepared based on the materials of Alexei Nadezhin, March 2017 ammo1.livejournal.com

This article has been read 16,516 times
The article is included in the sections:Interesting about sound
journeyorgan